This is Petticoat Rule, a radio program dedicated to unraveling the mystery of creative productivity by examining the lives of women involved in the music industry. Each episode aims to develop an intimacy with the artist so as to illuminate her unique relationship with her creative spirit. We hope to inspire listeners to put in the work and unleash their unique inventive talents!

This project supported in part by a Seed Award from The Sprout Fund.


ABOUT THE NAME 'PETTICOAT RULE'

Let’s travel back in time to 100 years before the launch of this podcast. It would be 1917, the year Einstein published his first paper applying the general theory of relativity to model the cosmos, the year the U.S. joined its allies to fight in World War I, and the year Jeannette Rankin of Montana was sworn in as the first woman member of the United States House of Representatives. It was also 3 years before the 19th Amendment to the U.S. Constitution was ratified, granting women the right to vote – a right termed woman suffrage. For the previous seventy years, activists such as Elizabeth Stanton, Lucretia Mott, Susan B. Anthony, and Jeannette Rankin herself fought a hard battle to earn women this basic right, met with much opposition along the way. One such anti-suffrage campaign is depicted in the pamphlet below, an actual historical document. As you can see in their fifth argument, the anti-suffrage writers invoke the term ‘petticoat rule’ in a derogatory fashion, to describe a potential future where the women’s vote might outweigh the men’s, implying that this would be an unfavorable state of affairs. Here in this podcast, we appropriate the term and employ it in the opposite direction. While woman have come a long way in 100 years, we recognize that we still have a long way to go to find equality with our male compatriots. Thus, when we had the idea to create a show about creative productivity in the music industry, it was a natural choice to focus on women specifically. In this way, we contribute to the equalization of women in this traditionally male dominated field and hopefully beyond. In our studio, we care, we cooperate, we speak our minds, we are free, we take risks, and we accomplish: we live by Petticoat Rule. 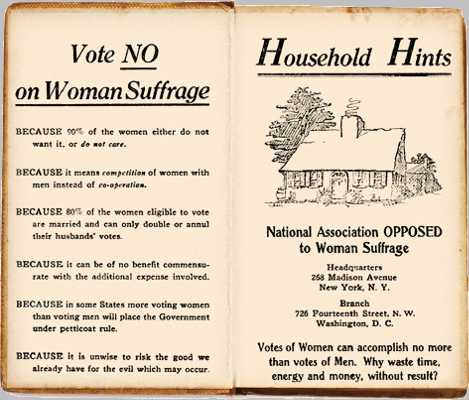